Last year Dan Rackham came to BUILD with an idea that had been mulling in the back of his mind for a while, and now a year on GoChatter Custom Videos is up and running, working with a number of ministries and churches including Thy Kingdom Come and Christian Publishing and Outreach (CPO). James Doc sat down with him and talked to him about GoChatter, coming to BUILD and getting a team together around an idea…

James Doc (JD): You joined us at the first Kingdom Code hackathon back in 2015… What motivated you to come along?

Dan Rackham (DR): I’m not a coder, but I’m just fascinated by the ideas that go round the room. The idea of so many people together in one room for the hackathon is massively invigorating!

At university I’d been involved with a small tech start-up. I enjoyed the experience of working with coders and of building something that then people could use. And when I got the invite to the Kingdom Code hackathon, the idea of it was substantially different to any other conference that I’d ever heard of. When I think about it, at that stage I was making quite a lot of videos and I thought, ‘maybe people could use the video skills in some of their projects.’

JD: What were things that stood out for you from what you saw in that room?

DR: It was fun how people were so dedicated to working on their projects that they slept on the couches overnight! The idea of giving a very intense burst to a project, that excites me. I remember thinking to myself, ‘wow, this is quite ambitious, I mean, is anything going to be made?’ People who had just met got into smaller groups, working collaboratively with each other. That’s the sort of collaboration I’ve only seen in a start-up, it’s exciting.

But we weren’t just spending the weekend head-down on a computer. We opened the Bible together, we prayed, we sang. It was really good in the sense of refocusing us to why we were working that weekend. And the groups were taking time out throughout the build together, to pray about their ideas and their concepts. 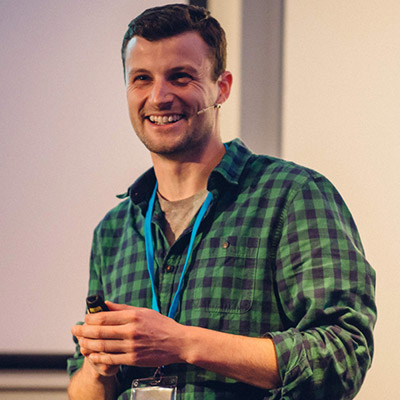 JD: You came last year with an idea… What was the idea?

DR: The concept was that churches want to interact on social media with video and would love to not just post a generic video but have their own customised video, for example inviting people to their Carol Service. The concept was creating a tool that very easily allowed somebody with no video skills to fill out a form which then generates a video which looks professional and easy to download. They can then share with their congregation in church or they can put it up on social media.

It was a simple idea, but I remember saying to you; ‘look, is this possible? What do I ask people?’ Remember, I’m not a coder, so I just came along and you said, well you need to ask for somebody who is keen to look at how you manipulate text in video. And so that’s what I asked for, and sort of spelled the idea out!

JD: And what did you get at the end of BUILD?

DR: It was great; there were six people who said ‘ok that sounds like something that I could help with, I’ve got a bit of skill in this area’. We worked together really well- I mocked up an idea of what it might look like in terms of UI and an example video. Then the team just worked on it to make it happen. At the end of the hack we had it working, it was almost good to go!

The hackathon did two things for me; firstly it proved to me that it was worth investing some more time and effort in this idea. Because here’s six people who had decided to give up a day of their life and you know I’m very grateful for that. Secondly, the fact that they were able to do what I had envisioned showed that actually this was completely possible, it was just that no one had done it before. So it spurred me on in that, and just an encouragement that other people are keen to sort of get involved with your crazy idea. 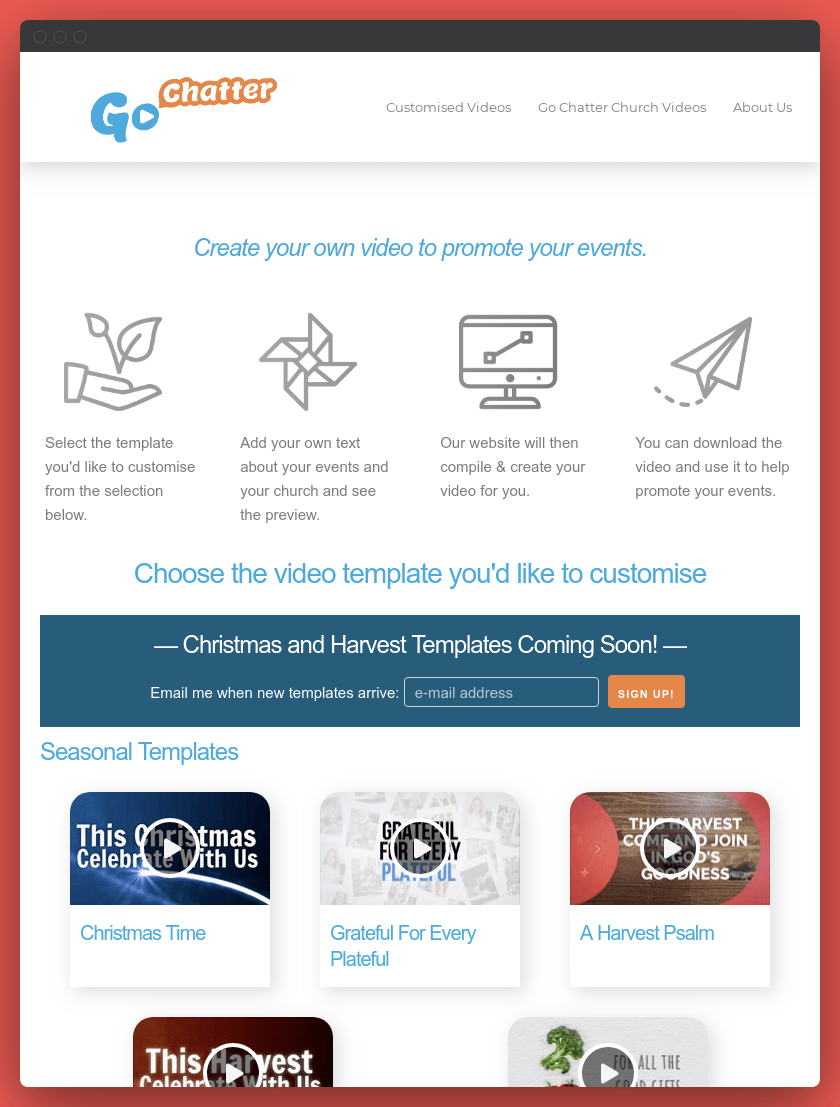 JD: We’re a year after that hack, the video generator has had a significant amount of work… What’s happened since the hackathon?

DR: GoChatterCustomVideos.com has launched! It is up and live. It’s still very much MVP; there’s about fifteen templates now, various things, some for prayer events, some for harvest, and some for Christmas. These are all templates that your church could go on, fill out the form and then render a video that you could use. It only happened because of God’s providence, he put me in touch with someone called Mike, and I’ve been working with Mike since December, he’s done a wonderful job of building, reworking, spending a lot of time on the backend and we’ve now got a tool which has generated just over 1200 videos for churches across the UK.

We’re now exploring how to make it financially sustainable; the Christmas videos that we’re working on will be £4 each and that just goes a little bit of the way to trying to cover the costs of both keeping the lights on the server, and covering development time from Mike.

JD: Final question, if there's someone who is sitting on the fence, thinking about coming along to BUILD, why should they come?

DR: Oh, they definitely should! I’m not a coder; there's a place for all types of people. I found I could offer ideas, I can offer some other experience that I’ve got. I needed the coders, I needed the designers, it would be great to have a whole variety of skills there. But I’d say come along because you’ll be an encouragement to whatever team you’re part of, you’ll help them sharpen their ideas.

Come along because it’s a genuine group of people who are trying to work on something together. And at the end you just won’t find anything quite like it. You know, at a conference you go and you just sit on a chair all day, or if you go to you know like a sort of a digital meet up with other photographers all you do is talk about cameras… But at Kingdom Code BUILD you get a chance to bring your faith into something and work on a project together. You don’t need to come with a project; you’ll be a massive blessing to somebody for whom this could be a really crucial, massive boost to their project. So yeah, come along!

Kingdom Code BUILD brings together Christians in the world of tech from across Europe to practically explore our how faith in Jesus connects with our technical skills.

One of the BUILD projects in the wild…

Last year Dan Rackham came to BUILD with an idea that had been mulling in the back of his mind for a while. James sat down with him and talked to him about GoChatter, coming to BUILD and getting a team together around an idea…

Back to all posts

Kingdom Code BUILD brings together Christians in the world of tech from across Europe to practically explore our how faith in Jesus connects with our technical skills.

Sign up and receive all the latest news and meet up information from Kingdom Code: